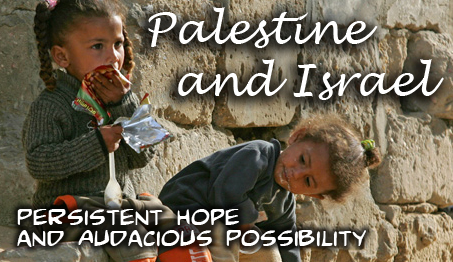 The United Church suggests the use of the following resources for further study and action:

Living Faithfully in the Midst of Empire

Within this framework of partnership, the church is critically examining the impact of its role, both locally and in the broader global context, through a seminal study process called Living Faithfully in the Midst of Empire. This study process was approved by the 39th General Council in 2006, which called on the church to confess our complicity in empire, defined as the convergence of the multiple forces of military, economic, cultural, social and political domination for the benefit of the few at the expense of the many. There are multi-generational resources available to help United Church people delve more deeply into examining our role in empire as we seek alternatives to empire in order that we might “live faithfully ” in the midst of it. For more information on this, you can check out the web site at: http://www.united-church.ca/getinvolved/missiontheme

You are probably well aware of the United for Peace Campaign, which is running from November 4, 2007, to December 2009. This campaign was also approved at the 39th General Council 2006 out of grave concern for the situation in Israel and Palestine. The scope of the campaign has been broadened by the General Council Executive to also address violence and the need to work toward just peace in Canada and in other parts of the world. There are education and worship resources available online for congregations and groups interested in learning more about root causes of conflict, including the occupation of Palestinian territories. You can find these at http://www.united-church.ca/getinvolved/unitedforpeace/resources

The New England Conference of the United Methodist Church in the US has developed an extensive list of companies for further research and dialogue regarding their operations in the occupied territories [ http://www.neumc.org/page.asp?TableName=oPages_6KF3UU&PKValue=178 ]. They have also been working with Who profits? [ www.whoprofits.org ] which compiles a database that reflects an on-going grassroots investigation effort by activists in The Coalition of Women for Peace, a leading Israeli feminist peace organization, dedicated to ending the Israeli occupation of the West Bank, Gaza and the Golan Heights and reaching a just peace in Israel/ Palestine. Your community may wish to pursue engaging in a process of ethical investment to screen your investment portfolios, according to the criteria laid out in the United Church’s ethical investment resolution.

The Ecumenical Accompaniment Programme in Palestine and Israel After hearing from David, people in your community may want to seriously consider becoming an ecumenical accompanier. Its mission is to accompany churches in Israel and the occupied Palestinian territories in their non-violent actions and concerted advocacy efforts to end the occupation and support a just peace in the Middle East. As we witness the devastating impact of this conflict, our solidarity and accompaniment is crucial at this time. ” For more information on the EAPPI, please check out www.eappi.org. ” For information on becoming an Ecumenical Accompanier through the United Church, contact the People in Partnership portfolio at http://www.united-church.ca/getinvolved/global/overseas

The United Nations Office for the Coordination of Humanitarian Affairs in the Occupied Territories (these are as unbiased monitors with constant reports from the ground as people might get): http://www.ochaopt.org

A key partner with some great resources for further understanding the complexity of this occupation: www.sabeel.org

Rabbis for Human Rights do tireless solidarity work in the West Bank: http://rhr.israel.net