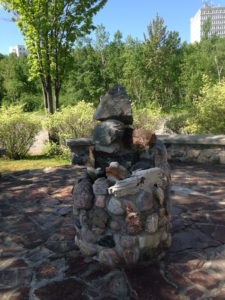 The Apology Cairn is situated in the parking lot at Laurentian University in Sudbury, Ontario where the 1986 Apology to the First Nations peoples occurred. Under the leadership of Elder Art Solomon, volunteers from the Manitou conference worked to create the memorial. The Cairn itself includes rocks that Presidents from all the Conferences brought to the same General Council meeting that the Apology took place. Other stones that were used in the construction originate from First Nations communities. The field stones came from the M’chigeeng First Nation and red flagstone came from Whitefish River First Nation (“Apology Cairn”). The circular shape of the Cairn represents the Circle of Life and the four openings represent the four different directions of the Universe (The United Church).

The Cairn was officially dedicated at a ceremony held on October 1st 1988. Two plaques currently adorn the Cairn. One that was created by the Whitefish River First Nation that explains the significance of the red flagstone and a second (which was added after the dedication) explains the meaning of the memorial in English, French and Anishinabemowin (“Apology Cairn”).

The Cairn remains “incomplete” and can be added to as the reconciliation process continues. 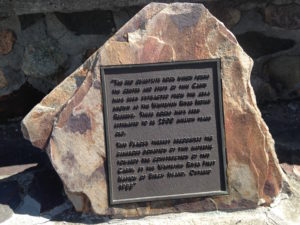