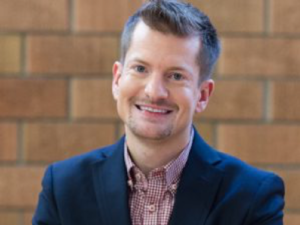 His first love was theatre, but his second love was the sciences, which led him as a bright-eyed 18-year-old to Montreal where he completed a Bachelor of Science degree in Microbiology and Immunology at McGill University. During those years Jeff found his third love and true calling to serve the church and soon after graduation began a Master of Divinity degree at The United Theological College.

After Ordination Jeff spent 6 years in Ministry with the people of Gaetz Memorial United Church in Red Deer, Alberta, which became an affirming congregation shortly after his ministry there ended. During that time, he was involved in many community initiatives, culminating in running as a Liberal candidate in the 2015 Federal Election

Jeff is passionate about Indigenous issues, harm reduction, and building bridges across our differences to build inclusive community. Jeff has a Greyhound-Dalmatian named Chaz. You can often find them out and about, going for long walks and jogs, camping or cuddling.